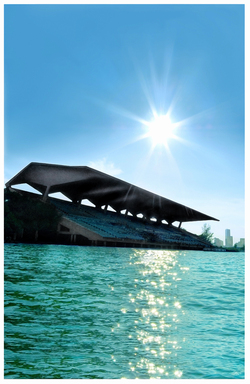 The Miami Marine Stadium, once threatened with demolition, will be showcased at a Dade Heritage Trust conference on Miami Modern Architecture, to be held March 11-12, 2011 at the Eden Roc Hotel on Miami Beach.

Designed by Cuban-American architect Hilario Candela at the age of 28, the Miami Marine Stadium on Virginia Key is considered an icon of Modernist architecture.   Situated on the blue waters of Biscayne Bay, the Marine Stadium’s cantilevered roof appears to float over the 6500 seats of the stands below.   From its opening in 1963 to its closing after Hurricane Andrew in 1992, the Marine Stadium was a place of spectacle and celebration, with boat races and concerts on a floating stage.  Dade Heritage Trust and its Friends of the Marine Stadium have campaigned for three years to rescue this landmark, securing its historic designation by the City of Miami and attracting national publicity and widespread support for its reuse.

A presentation on the Marine Stadium will be given at the conference by Don Worth, a co-founder of Friends of Marine Stadium, who will discuss plans towards its restoration.          Architect Hilario Candela will be honored at the conference’s “Living Legends” luncheon for creating a Modernist  masterpiece,  “an architecture for that place where the land and the sea kiss.”         A boat tour of the Marine Stadium and Basin on Virginia Key is planned for Saturday, March 12th. AIA Continuing Education Credits will be offered at the “Meet MiMo” Conference .