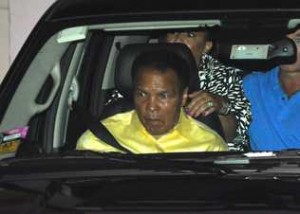 Boxing celebrity and Parkinson’s disease sufferer, Muhammad Ali, headlined a VIP reception on September 23, 2010 at the re-opening of 5th Street Gym in Miami, where he used to train. Two non-profits were selected as charity partners for this event—the National Parkinson Foundation (NPF) and Neat Stuff For Kids— and proceeds from items sold at the event will benefit both organizations.

“As a national non-profit with headquarters in Miami, we are grateful to be part of this local event as a charity partner,” said Joyce Oberdorf, NPF President and CEO. “With the support of people like Muhammad Ali, NPF is able to improve the quality of care for every person diagnosed with Parkinson’s disease.”

The former champion boxer Muhammad Ali was diagnosed with Parkinson’s in 1984 at the age of 42 and is one of the most high-profile people battling the condition. The Muhammad Ali Parkinson Center (MAPC) and Movement Disorders Clinic is a National Parkinson Foundation Center of Excellence, and is a resource for people with Parkinson’s and their families in Phoenix, Arizona. The Center was established in 1997 by Muhammad Ali and offers a variety of educational programs, recreation therapy and support groups.

Founded in 1957, the National Parkinson Foundation’s mission is to improve the quality of care for people with Parkinson’s disease through research, education, and outreach. Since 1982, NPF has funded more than $155 million in care, research and support services.

For more information about the National Parkinson Foundation, please visit www.parkinson.org or call 1-800-327-4545.